Maddy initially felt 'fobbed off' by her doctor but found the courage to go back and has now started an effective treatment which has helped her psoriasis and boosted her self-esteem. 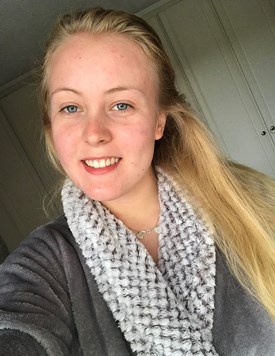 Ever since I can remember I have suffered with psoriasis on my scalp. It used to be easily managed by shampoo and scalp lotion from the doctors.

As I got older my psoriasis got worse, to the point where it was becoming unbearable. I had it all over my scalp so I went to the doctors again and I was told it might not be psoriasis. Well what a setback that was. I thought I’d been wasting my time and energy in using numerous things that, of course, weren’t going to work if I didn’t even have psoriasis.

Following that I was given even more lotions and potions to try treating my ‘dermatitis’. Well, of course, none of these worked, and flared my psoriasis up even more! So another trip to the doctors it was…

This time I was reverted back to scalp lotion and felt pretty fobbed off and fed up. I felt that I had to just get on with it and cope with it as it was. Luckily for me I’m blonde so it wasn’t obvious I had psoriasis except the constant itching, but it was not visible! That was until it began to appear on my hair line and then could be seen. This was when it seemed to affect me most. I constantly worried, ‘what if?’ What if people think they can catch it? What if people think I’m contagious?

After feeling as if it was something I had to get on with, I plucked up the courage to go to the doctors. How wrong was I? I shouldn’t have suffered. I wish I had gone back to the doctors sooner but just thought I would be fobbed off yet again and would be wasting my time and money on prescriptions that weren’t going to work! 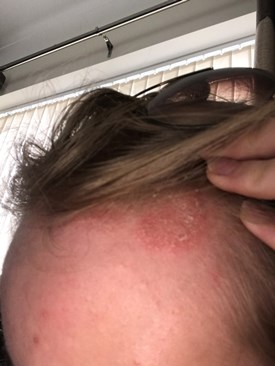 I also suffer with psoriasis in my belly button – the most painful thing ever! Again I was told on numerous occasions it was an infection. I was given antibiotics, antibiotic cream, steroid cream and it kept returning! I was told I had to stop using the steroid cream as it can only be used short term so, again, felt like a lost cause. Luckily I was given protopic cream quite soon after my problems becoming unmanageable and that has worked wonders and I use it regularly to keep my psoriasis at bay.

So recently I went back to the doctors, after suffering for months on end and letting it affect my life and self-esteem. Well what a successful appointment that was. I was given life changing treatments that have not only improved my scalp but also changed my life and boosted my self-esteem no end! It was the first time in a while I have been to the doctors and felt that I was listened to and came out with a positive outcome. I was prescribed calcipotriol and cocois.

I am training to be a children’s nurse currently, and I hope one day I can offer support and reassurance to children who feel how I did, like there was no way out and it was just something that we have to get on with, because it really isn’t! And until it’s controlled you don’t realise the impact it had on you!