Kate's psoriasis first appeared when she was around 10 years old. Recently she has learned to love herself again and begin embracing her skin, even getting a t-shirt made with her own slogan on it!

I was around 10 when my psoriasis first came up. My mum took me to the doctor as she thought it could have been ring worm because it came up in a large red circle only on the side of my calf. Since then I have had plaque psoriasis on my arms, legs, shoulders, back, face, ears and scalp. Due to this, I was bullied badly in Middle School for looking different and it has made me very self-conscious of how I look and how other people see me.

I am only now, after 7 years, starting to finally learn to love myself for who I am and embrace the fact that I am different. It has taken me a long time to realise this, despite the constant support of my family and close friends. I do still have moments of insecurity but they go as quickly as they arrive now because of their support.

My psoriasis has had its own ups and downs. In the beginning it started off as plaque psoriasis and then in Upper School guttate psoriasis flared up because of tonsillitis. This covered my back, chest and neck. This again caused bullying until the flare up went.

Recently, I have had another flare up of guttate psoriasis, only this time it hasn’t gone down as quickly so I currently have the two types on my skin, but luckily only in the areas I already have plaques. This has been hard to deal with mainly to do with showing my legs in public as they are the worst affected area in terms of the coverage of psoriasis. 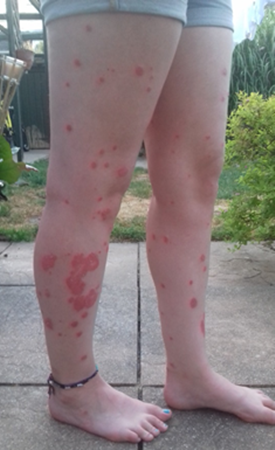 I have always been conscious of my legs because they have always looked worse but this is the worst they have been. I managed to pluck up the courage to wear shorts in public on a shopping trip to Portsmouth but it ended up making me feel very low afterwards because of how many people just stared at my legs and how obvious this made it. Even if I stared back at them they would just look at me and then continue to stare at me like I was an alien.

I had been building my confidence up for a while by posting pictures of my arms and then eventually my legs on my Instagram account to prove to myself that it wasn’t as bad as I thought, and all of that confidence took a massive blow after that trip. However, I got a t-shirt made up with my own slogan on it that gave me a boost as it made me feel like I had a shield against the stares and also the amazing support of my family, friends and boyfriend gave me the confidence to wear a skirt to school with no tights which I have never done since my psoriasis appeared.

I am also hopefully going to finally get on top of my skin by going on medication from the hospital that helps to stop my body attacking itself as much. This comes as a relief after years of trying so many different products. I recently worked out I have used over 30 products to try and treat my skin.

My advice to people who are struggling with anything to do with self-confidence over anything is to embrace who you are, everyone is different and unique and there is no such thing as “normal”. Be who you are and don’t listen to people who don’t accept you for who you are.