Georgia first noticed her psoriasis patches after bullying made her feel anxious about her appearance and going to school. After regaining her confidence years later she started an awareness campaign to uplift and empower others with psoriasis. 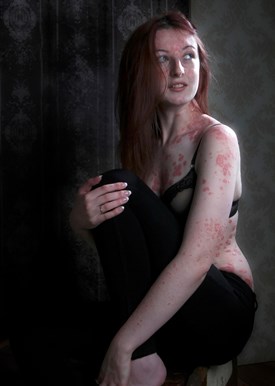 I've had psoriasis since I was 15, but it’s hard for me to remember a life without it. It’s always been by my side in some way; it was there when I when I sat my exams, when I went to prom, when I learnt to drive and when I started University! Whether it’s one little patch behind my ear that doesn’t seem to want to go or entire flare up that can cover most of my body – it never fully leaves! I used to find that really difficult and frustrating, I’d spend nights stressing over why it wouldn’t go or why creams just wouldn’t work! I would try every tip under the sun in an attempt to attain the perfect skin I was seeing plastered around mainstream media every day and it’s taken me 6 years to realise that that really isn’t necessary.

I have always had dry skin, ever since being a baby, and I knew that my biological Dad had strange patches of thick, white skin on his elbows but I never thought anything of it. When I was told I had eczema in primary school, I let that blow over and took it in my stride. As far as I was concerned I was just a regular child – I just had to moisturise! Everything changed around that time.

In my last year of primary and into my first few years of high school I became a target for bullies. I stood out because I didn’t comply with social norms. My clothes were different and I didn’t bother styling my hair when others did. When girls my age were starting to get nice school bags and learning how to use makeup I was quite content just being me. I became a target both in and out of school. In fact, I distinctly remember a voicemail I received off an anonymous number in year 9 which told me that “no boy would ever come near me” because my “nose was massive and I wore a frickin’ Gola bag”. It was around this time that things really changed.

The bullying had led to some quite severe confidence issues for me, I had become incredibly withdrawn and was upset to look in the mirror. I tried to keep up with trends and ended up having to seek therapy as I was getting changed up to 6 times each day before I could leave the house. That was when I woke up with blemishes. I’d had small patches of psoriasis on my elbows before but thought nothing of it as I hardly noticed them – but here I was, aged 15, looking into the mirror and seeing red patches appearing on my face. To the bullies’ delight, I would wear thick, dark foundation to cover them and my Mum quickly took me to the doctor – that was when I found out I had psoriasis. On my face, my chest, my scalp and in my ears. I remember the doctor asking me if I had recently been under any stress or upset. Thankfully, no-one seemed to notice at all and a little bit of steroid cream easily treated it and it disappeared after about 2 weeks – so I thought.

In my first year of sixth form it came back. Thick, aggressive plaques over my arms, back, legs and face. This time it really hit hard. There was days I refused to go in. I remember going into my Drama class and people asking what it was or if I was ill. That was the first time I told anyone that I had psoriasis. To my surprise, people were supportive – my friends would tell me that I looked pretty, like a leopard, and I found some peace in that.

When the psoriasis began to spread and the creams stopped working, the doctor sent me to a dermatologist who referred me for phototherapy. It was draining having to drive for an hour 3 days a week to stand in what just looked like a sunbed for 3 seconds (though this time gradually increased) but it worked unbelievably well. After about 6 weeks, the psoriasis was hardly noticeable at all and I was happy with my skin again.

It remained relatively clear for 4 years after that, until just after my 21st birthday when I noticed a small patch appear right in the middle of my chest that didn’t seem to want to go! I went through numerous big life changes and emotional upheaval and I knew what was coming. I am currently in the most severe flare I have ever had. I have psoriasis on my chest; arms, back, stomach, legs, scalp, neck, ears, vagina, breasts, nipples, bum – and I have no reason (or way) to pretend I don’t. This led to me making the decision that has changed my entire life!

In May, I created an Instagram account: @meadowsonmyskin – to document my journey with psoriasis. I aimed to uplift, inspire and empower other people like me who I knew would be suffering. I now reach out to others and set the best example that I can whilst showing that it’s okay to have a skin condition. It’s okay to not look like media models! I’m currently being referred for my second round of phototherapy which I hope will clear up my flare – but even if it doesn’t? Never mind. That’s my new attitude. I’m not ashamed to be me, I’m not ashamed of my skin. I have psoriasis, but psoriasis doesn’t have me.