Ben tells us about the invaluable support he has found through talking to other people with psoriasis on Instagram and why he is feeling more hopeful thanks to UVB treatment. 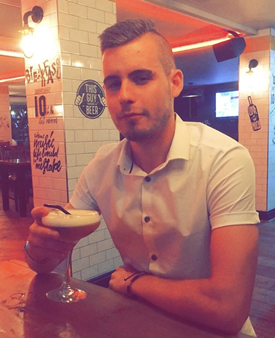 Soo... It all started back in 2009 when I was in Maths, I was just 15 at the time. I noticed my head felt quite itchy, so not thinking much of it I gave it a scratch; as I scratched more and more I noticed what I thought at the time was dandruff all over my workbook. I felt really embarrassed as it was clearly noticeable when I checked my head in the mirror. That night I got home and asked my mum to check my hair... she said it looked like something called ‘Ringworm’. She then booked me a doctor’s appointment for the following week.

When I saw my GP, he said it was something called scalp psoriasis, and that it could be controlled but wasn’t curable. I remember thinking at the time I wish it was that blasted worm thing my mum had previously mentioned. I managed to control the scalp psoriasis with ‘Betnovate scalp application’ and, even to this day nearly ten years later, I still use it now and then when it appears to get sore. 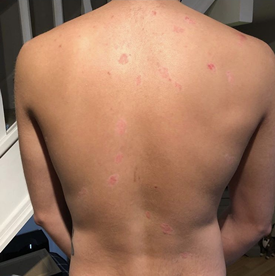 A few months after discovering I had scalp psoriasis, I noticed a few pink patches on my arm and on my torso. I went back to the doctors and he confirmed that those were also patches of psoriasis, and gave me what was then ‘Dovonex Cream’ (now only in ointment form in the UK I believe), to put on the plaques. The patches didn’t appear to go down much, however it managed to control some of the patches over the next four or five years and reduce some of the redness of others.

At the age of 20 I went back to the doctors as I was unable to control my psoriasis with ‘Dovonex’, so was then given ‘Dovobet gel’. I wasn’t given any instructions other than to apply it once at night. Unfortunately, being a bit naive at the time I didn’t do any research and wasn’t aware to have a break from using it. After using it constantly for two, maybe two and half years I was having a constant flare up. I managed to get a doctor to refer me to a dermatologist. 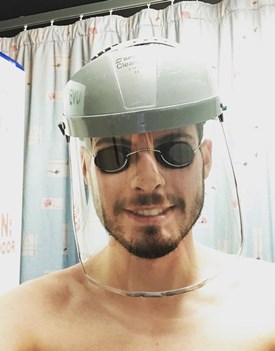 After waiting 5-6 months for the appointment, I was put back on Dovonex and then ‘Enstilar foam’ (and also told my severity of psoriasis is mild and that I should cheer up). Unfortunately for me the Enstilar foam also made me flare up the moment I came off of it. I then tried to get another dermatology appointment as I wasn’t happy with the dermatologist that I saw. I was given an appointment but it was another 6 month wait. In the meantime I paid to go privately but was told there wasn’t anything that they could do.

I eventually got round to seeing a new dermatologist about four weeks ago... finally I feel like someone actually cares and listened to what I had to say. I’ve been referred for UVB treatment twice a week, and am currently on my fifth session. I haven’t noticed much improvement yet but I’m hoping it’s still early days.

I would like to thank the Instagram community, because without being able to speak to others I wouldn’t have been able to keep sane at times. My wife is very supportive, however it’s nice to speak and hear from like-minded people. I recently set up my own Instagram page to share my journey with others: @benjaminpsoriasis.