The 'Top Ten' list was agreed upon by people who are living with psoriasis, carers & healthcare professionals at a workshop in September. 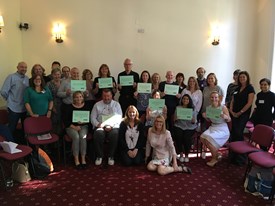 The Psoriasis Association is delighted to announce the Top Ten Psoriasis Research Priorities, agreed upon by people who are living with psoriasis, carers and healthcare professionals. This 'Top Ten' list – the product of the psoriasis Priority Setting Partnership (PSP) - will be considered by research funders to ensure future psoriasis research focuses on the areas that matter most to the 1.8 million people in the UK who live with the condition, and those involved in its care and treatment.

The project followed the James Lind Alliance’s Priority Setting Partnership method, and began with an open call for people with psoriasis, carers and healthcare professionals to submit the questions that they wanted answering about the condition and its treatments. Over two thousand questions were received! These questions were refined through a process which included a second round of voting and a final workshop day to agree on the 'Top Ten'.

1. Do lifestyle factors such as diet, dietary supplements, alcohol, smoking, weight loss and exercise play a part in treating psoriasis?

2. Does treating psoriasis early (or proactively) reduce the severity of the disease, make it more likely to go into remission, or stop other health conditions developing?

3. What factors predict how well psoriasis will respond to a treatment?

4. What is the best way to treat the symptoms of psoriasis: itching, burning, redness, scaling and flaking?

5. How well do psychological and educational interventions work for adults and children with psoriasis?

8. To what extent is psoriasis caused by a person’s genes or other factors, such as stress, gut health, water quality, or change in the weather / temperature?

9. Is a person with psoriasis more likely to develop other health conditions (either as a consequence of psoriasis or due to the effect of treatments for psoriasis)?  If so, which ones?

Helen McAteer, Chief Executive of the Psoriasis Association, comments, “Traditionally, academic researchers and commercial interests have dominated the research agenda in psoriasis. The Priority Setting Partnership offered an opportunity for people living with psoriasis, their family members, and the healthcare professionals treating them to have their say on the future of psoriasis research. We can be confident that the Top Ten priorities we now have before us reflect the real interests of people affected by psoriasis, and they will ensure that work is carried out in these areas. ”

Dr Helen Young, Lead for the psoriasis Priority Setting Partnership, comments, “Our entire endeavour has had both a patient and health-care professional perspective. The robustness of the Psoriasis PSP has been due to the rigour of the PSP Steering Group who have had oversight of the project in addition to the collaboration with individuals (both patients, carers and healthcare professionals) and our partnership with The Psoriasis Association, UK Dermatology Clinical Trials Network, the British Association of Dermatologists, the British Dermatological Nursing Group, the Primary Care Dermatology Society, and the International Psoriasis Council. We are enormously grateful for the support of the James Lind Alliance who have facilitated the Psoriasis PSP.”